A couple from Haverhill who won £148 million EuroMillions jackpot are to divorce.

It said: "Gillian Bayford confirms that her marriage to Adrian has broken down irretrievably and they have separated.

Gillian requests that the media respect her and her children's privacy and that of their wider family at this time.

Gillian will be giving no further comment about this matter either now or in the future.'' 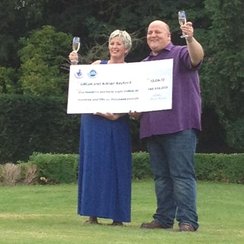 Mr Bayford, 43, told the Sun that he had left the couple's £6 million Georgian mansion and moved a 10-minute drive away to a £500,000 four-bedroom house in Suffolk.

At a press conference organised by lottery organiser Camelot after their win, mother-of-two Mrs Bayford, 41, said she hoped the windfall would allow the family to spend more time together.

At the time she was working nights as a healthcare assistant on the children's ward at the Addenbrookes Hospital in Cambridge while Mr Bayford ran a record shop in Haverhill, which has since closed.

She said: "We have lived within our means and been comfortable but we have been like ships in the night to earn the income we needed.

It will be fantastic to spend more time as a family now.

This money has come at the right time for us and is going to benefit the whole family.''

A Camelot spokeswoman said only a small minority of winners regretted their lottery success.

She added: "We regularly conduct research among National Lottery winners about life after the win.

In recent research undertaken, only 2% of winners had separated from their partner since winning a major prize with 99% of winners claiming to be as happy or happier than before their win.''