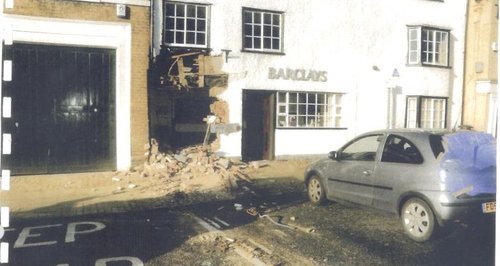 A gang of four men, who plotted and carried out a ram raid on a bank near Huntingdon, have been jailed for a total of 20 years.

Ivan Hutchinson, Ebby Hall, Kevin Smith and Richard Clues came up with a plan to steal high powered vehicles, disguise them with faked number plates, then carry out a smash and grab operation using a stolen JCB at a bank in Kimbolton. 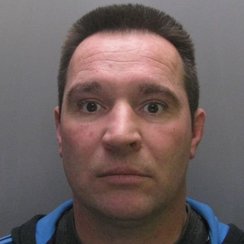 After ramming through a wall of the Barclays Bank in the JCB at 1.27am on September 27, last year, the ATM was ripped out and loaded onto a Ford Focus which had been stolen from Wootton, Bedfordshire, nine days before.

A Land Rover which had been stolen from Crowland on September 24 was seen nearby.

A BMW, which had been stolen in Norfolk in July 2012, was spotted being driven by a man in a balaclava along the A605 at 125mph shortly afterwards.

Police followed the vehicle to the Norwood Road traveller site in in Peterborough. The driver reversed, ramming the police car several times before stopping and running off.

Officers gave chase and Hall was arrested nearby.

An angle grinder and faked number plates were discovered in the boot of the BMW. 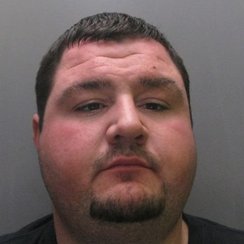 The Land Rover, Ford Focus and ATM were all found burned out in a copse of trees the following day in Keyston.

Forensic tests linked Hall to the JCB. Phone records then linked Hall with Smith and the burglary in which the Focus was stolen in Wootton. They also linked Hutchinson with the conspiracy. 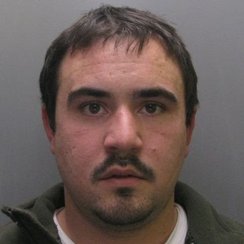 Smith was arrested on December 13, and £1,500 in cash was discovered hidden at his home in Spalding.

Hutchinson and Clues were also arrested. Officers discovered a number of registration plates which Clues had made up in his workshop in the garage of his home in Risby, Bretton, Peterborough.

Hutchinson, 29, of Brington Road, Brington, Huntingdon, had initially denied any involvement, claiming he was not linked to one of the mobile phones. However, his plea changed on the day of trial last month when it emerged that one of the key contacts within the phones was his wife.

He pleaded guilty to conspiracy to steal motor vehicles and conspiracy to burgle. They were sentenced at Peterborough Crown Court today (Wednesday).

Hutchinson was jailed for seven years and two months, Hall and Smith were both sentenced to five years and three months, with Hall given a further 10 months to run consecutively for breaching a suspended sentence. Clues was jailed for 18 months. 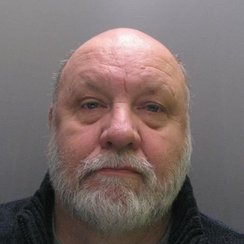 Detective Chief Inspector Kevin Vanterpool, who led the investigation, said: "This was a sophisticated conspiracy to steal ATMs from banks.

"While the method of ripping out the cash machine appears relatively crude, an exceptional amount of pre-planning went into identifying and acquiring the vehicles to be used in the offence and subsequent getaway, hiding their identity through false plates, destroying evidence and hiding the money.

"All of those convicted played crucial roles in the plot and the sentences passed by the court reflect that.

"A huge amount of work went in to bringing this gang to justice and today is the conclusion of months of meticulous investigation.

"We will not tolerate this type of organised crime and no-one is above the law. We will pursue whatever lines of enquiry are necessary to bring those committing crime in Cambridgeshire to justice."