Cambridge University research suggests the NHS would save £250 million a year - if one in ten of everyone's trips were by bicycle.

Britain is still failing to fully embrace cycling despite having so many sporting successes on two wheels, according to former Olympic gold medallist Chris Boardman.

Yet  the country has still not truly embedded cycling into everyday culture, said Boardman who is British Cycling's policy adviser.

His thoughts came as British Cycling published Cambridge University research which showed that there would be NHS savings of at least £250 million a year if 10% of trips in England and Wales were made by bike.

Boardman said: "Britain is now one of the most successful cycling nations in the world. How can we be getting it so right in terms of elite success but still be failing to truly embed cycling as an everyday part of British culture.

"This research demonstrates that the impact of more cycling would have positive effects for everyone.''

He went on: "In the 1970s, the Netherlands made a conscious choice to put people first and make cycling and walking their preferred means of transport.

"It is no coincidence that they are also one of the healthiest and happiest nations in the world. Local and national government needs to wake up and realise that cycling is the solution to so many of the major problems Britain is now facing.'' 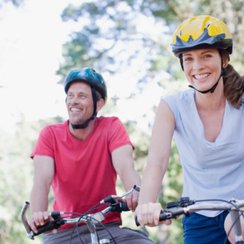 The 10-point manifesto seeks ways to get cycling in Britain at the levels seen in the Netherlands and Denmark.

British Cycling says opportunities to bring cycling more to the fore include getting the Government to raise its spending on cycling from the equivalent of £2 a head to £10 and tackling the dangers posed to cyclists by lorries.

British Cycling believes that there is now an opportunity to transform cycling given the right political will at national and local level.

Commission by British Cycling, the Cambridge University research said that If people made just one in 10 trips by bike, Britons could gain the equivalent of almost one million extra healthy years of life over the next decade,.

Also, if people replaced just five minutes of the 36 minutes they spend each day in the car with cycling, there would be an almost 5% annual reduction in the health burden from inactivity-related illnesses including heart disease, diabetes, stroke and some cancers.

If 10% of trips in England and Wales were made by bike, the savings to the NHS of the top inactivity-related illnesses would be at least £250 million per year.

Dr James Woodcock, a senior researcher at Cambridge University's centre for diet and activity research, said: "Cycling is a great way for people to embed physical activity in their everyday lives.

"If we can get people to stay active throughout their lives then it can make a huge difference to their health.''

After today's manifesto launch at Westminster Chris Boardman will be giving evidence on cycling safety to the House of Commons Transport Committee.

Safety has been under the spotlight of late following the tragic events in London last autumn when six cyclists were killed on the roads in a two-week period.

Meanwhile, the Local Government Association (LGA) said today that cycling safety could be improved if councils were given powers to target drivers putting cyclists at risk by breaking moving traffic laws.

The LGA called on the Government to implement Part 6 of the Traffic Management Act 2004 to allow councils to protect cyclists by enforcing cycle lanes and cracking down on illegal U-turns and box junction offences.

The association said Transport for London had been using similar powers for years - with research showing a 50% drop in offences - but added that police outside the capital had admitted to not having the resources to enforce them.

Councils would use the power to improve safety by targeting notoriously congested junctions or stretches of road. This would be publicised and clearly sign-posted with warning letters initially issued to raise awareness while persistent offenders would end up with a fine.

Most offences could be enforced by existing CCTV cameras but traffic officers could also issue fixed penalty notices.

It is a proposal backed by cycling groups and key cities - including Liverpool, Birmingham, Newcastle and Nottingham - while the Welsh Government has already acted to hand councils across the border Part 6 powers.

Ahead of giving evidence to the Commons Transport Committee today, Mike Haines, of the LGA's economy and transport board, said: "If the Government is serious about championing cyclists then it must hand councils outside London greater powers to tackle moving traffic violations.''