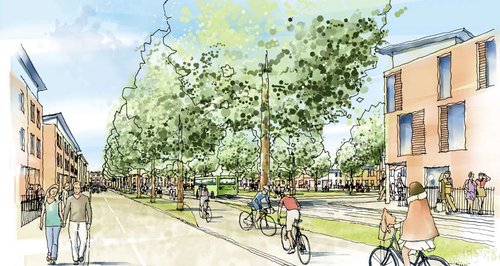 Local councils have agreed a £30 million deal with the promoters of the planned town of Northstowe for investment in community facilities.

This includes funding for a primary and secondary school at the planned South Cambridgeshire town, which will eventually be the country's biggest new town since Milton Keynes.

The plans have been in the pipeline for several years, but were held up by the recession.

Gallagher Estates has already submitted outline plans for the first 1,500 homes on the development, and these have been approved.

One in five of the homes in the initial development will be affordable rented or shared ownership.

Eventually, up to 10,000 new homes are expected to be built at Northstowe, which will cover the site of the former Oakington Airfield.

Cambridgeshire County Council and South Cambridgeshire District Council have now come to an agreement with the company on how much they will contribute towards community facilities, and what these will be.

The first phase of new homes will also include a local centre with shops and employment opportunities as well as a household recycling centre.

The first phase of new homes will also include a local centre with shops and employment opportunities as well as a household recycling centre.

This legal agreement has been finalised by lawyers and will soon be signed by all parties before being sealed.

Once completed the outline planning permission already approved by councillors for phase one will be issued.

Once planning permission has been granted, a series of detailed planning applications will follow, which will include the design and appearance of homes.

South Cambridgeshire District Council says these will be consulted on with residents. 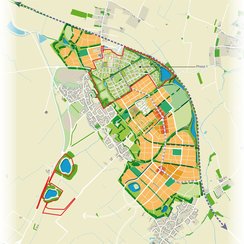 Building Work 'Could Begin This Year'

Subject to the detailed planning applications being agreed, developers have said to the councils that work could begin on site later this year.

Councillor Tim Wotherspoon, South Cambridgeshire District Council’s cabinet member for Northstowe, said: "Delivering a new town of the highest quality has always been our priority and this agreement will secure the money needed to provide the facilities that are vital to its success.

We know there is huge demand for new homes, especially at a price people can afford, and I am really pleased after a long period of negotiation that we have been able to secure the best deal possible.

We have a thriving economy in South Cambridgeshire with around 1,000 new jobs being created each year, but to continue our success story and quality of life for local people more housing is needed."

Councillor Ian Bates, Cambridgeshire County Council’s cabinet member for growth and infrastructure, said: "Securing a contribution toward a new secondary school as part of phase one of the new town is excellent news for the area.

It is rare to be able to do this at this stage of a town and will help make sure it gets off to the best possible start.

The highly successful Busway being in place before the first homes begin to be built, along with the recent planning permission for the new Cambridge Science Park Station, will also ensure new residents will have some of the highest quality transport links in the country on their doorstep.

But future phases of the town will also need a major upgrade of the A14 which we will continue to press the government on delivering as early as possible."

Alan Joyner, Executive Director at Gallagher, said: "We are looking forward to starting construction on site later this year.

This is the culmination of many years of hard work by Gallagher and its partners and we will be helping to provide the new community with a wide range of services and facilities in a great location for inward investment in homes and jobs."

Paul Kitson, Senior Manager of the Homes and Communities Agency, said: "This is great news.

As future plans for more homes unfold this year we will start to see a real momentum building on this development.

We are looking forward to talking to the public about these plans soon."