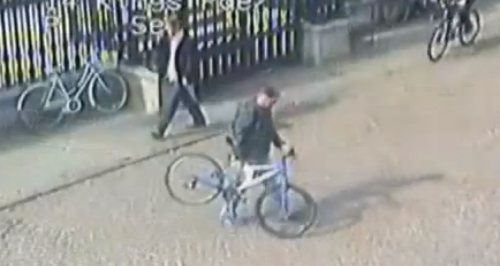 Cambridgeshire Police are asking people to be more vigilant after staging four brazen bicycle thefts, yet not receiving a single call to report the 'crimes'.

Undercover officers in plain clothes used bolt-cutters and ripped chains from the bicycles in Cambridge during the operation.

The thefts were set up as part of the city's Operation Huntsman which is using crime prevention advice alongside increased patrols to crackdown on robbery, burglary and theft.

In the space of a few hours, the 'crooks' ripped chains from bicycles and even grappled with bolt croppers cut through bike locks.

However despite being in full view of a host of potential witnesses, no-one reported the crimes.

CCTV footage of the thefts has now been uploaded to the force Youtube site and the video is being used to highlight the issue to students at Fresher's Week.

Officers are urging people to help police tackle cycle crime by reporting thefts when they happen.

Sergeant Andrea Gilbert said: "The CCTV is shocking because the thefts are blatant yet, despite a large number of people witnessing the crime, we didn't receive a single call.

Sadly people are too reliant on others to report crime, but we need everyone to play their part.

If you don't call police it means those thieves are potentially free to strike again, and next time you could be the victim.

We are committed to tackling bicycle crime, which is an ongoing issue in the city, but we need the public's help."

The thefts took place in King?s Parade, Market Square, outside Anglia Ruskin and in the Leisure Park.