The start line of the Cambridge stage of this year's Tour de France has been marked out, by the man in charge of the whole event.

He was there to view where Stage 3 of this year's race will start. 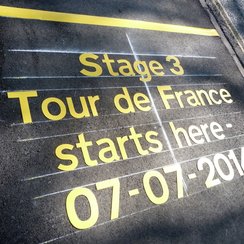 Christian told Heart why Cambridge was chosen as a starting point of a stage of the world famous race, "For us, it's very important to have a start in a prestigious city, and Cambridge is well-known all over the world, thanks to its university.

"Cambridge is also known as the city of cycling! "The famous university city of Cambridge provides a stunning setting for the beginning of Stage 3 of the Tour de France. The race moves onto Essex to showcase the county's beautiful towns, villages and countryside, before moving onto London for a spectacular finish on The Mall - seven years to the day after the 2007 Grand Départ. We are proud to come back to London and the UK, which will provide an incredible backdrop for the Tour."

The Cambridge stage of the world famous cycle race will start at Parker's Piece on Monday 7th July.

Beginning on Gonville Place by Parker's Piece, the cyclists will ride through the historic city centre via Regent Street and Sidney Street before turning left at the Round Church.

The peloton will then race through South Cambridgeshire via the A1301 taking in the villages including Trumpington, Great Shelford and Hinxton. The Tour will then leave the county travelling on to Saffron Walden and through Essex towards London to finish on The Mall in front of Buckingham Palace.