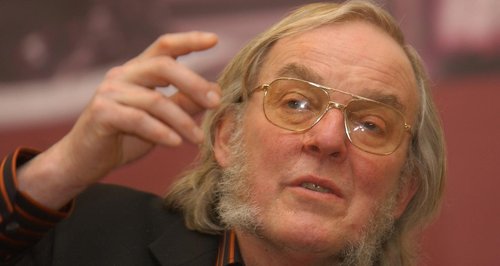 The Cambridge scientist who was best known for trying to land a space-craft on Mars has died.

Prof Pillinger, the driving force behind the Beagle 2 mission, died aged 70 after suffering a brain haemorrhage while sitting in his garden in Cambridge.

A short statement from his family said he passed away "peacefully'' at Addenbrooke's Hospital, and referred to "this devastating and unbelievable time''.

Despite a long and distinguished career in planetary science, Prof Pillinger will always be remembered for Beagle 2 - a very British space mission largely funded by private money.

The tiny craft was supposed to land on Mars on Christmas Day 2003 and search for signs of life. But contact with the probe was lost soon after it separated from its European Space Agency (ESA) mothership Mars Express on December 19.

A later investigation concluded that it probably burned up in the planet's atmosphere.

Lord Rees, the Astronomer Royal and former president of the Royal Society, led a host of tributes to the man who was almost as famous for his whiskery sideburns and West Country accent as for Beagle 2.

"Colin was one of our leading planetary scientists,'' said Lord Rees.

He helped the Open University to become a leading research centre in planetary and space science.

He studied lunar samples earlier in his career, but is of course best known for the Beagle project.

This was a failure, but a heroic failure.

Several far more expensive and elaborate Mars missions failed, and he deserves huge admiration for the way he cobbled together the funds for this project against all the odds, inspiring interest and enthusiasm along the way.

He was of course a character - an archetype eccentric professor.

His sustained efforts as a communicator, both live and on radio and TV, continued despite failing health in his later years.

He was committed to space exploration, and to its broader role in science education.

Most people welcomed a man who described these matters in simple language and a West Country burr - a welcome contrast to the typical Nasa functionary speaking in acronyms.

All space enthusiasts have reason to be grateful to him, and will miss him.''

Former colleague Professor Andrew Coates, head of the Planetary Science Group at the Mullard Space Science Laboratory, University College London, said: "I was shocked and saddened to hear the news about Colin Pillinger this morning.

It was a great experience to work with Colin on Beagle 2.

Colin was a visionary and an inspirational leader, and had a wonderfully involving interaction with the media as well.

His work with the Moon and meteorites is also legendary. He really raised our hopes of actually going to Mars in 2003 to look for past or present life - and we hope to follow up this zeal with the ExoMars rover arrival in 2019.''

Another Beagle 2 scientist, David Rothery, professor of planetary geosciences at the Open University, said: "If not for Colin I doubt if I would have migrated from geology to planetary science.

He invited me on to the Beagle 2 team because he realised he needed a geologist to advise on the landscape and the rocks that would be seen by Beagle 2's camera, and to contribute to discussions on how to prioritise the analysis opportunities within range of the sampling arm.

He had tremendous enthusiasm and motivation, and drove the project forward in way that no one else could have done.''

Professor David Southwood, president of the Royal Astronomical Society, said: "Colin was driven by science but especially the will to establish whether Mars had, has or could have sustained life.

That will was expressed in enthusiasm, wit and tireless work and was infectious.

He touched many lives and careers. He will be much missed.''

Professor John Womersley, chief executive officer of the Science & Technology Facilities Council (STFC), said: "It was with profound sadness that we learned of the death of our friend and colleague, Professor Colin Pillinger.

Colin's name is forever linked with the Beagle 2 mission to Mars - an ambitious project that, while it failed to deliver the science we were aiming for, really did raise the profile of space science in the UK, putting the exploration of Mars firmly in the public eye and raising the aspirations of the UK space science community.

Colin was the public face of a team that accomplished a great deal in delivering a British Mars probe, against all odds.

One colleague of mine has said that working with Colin at that time is much how she imagined working with Bob Geldof during Band Aid - 'no' was simply not an acceptable answer and when faced with it, Colin always found a way.

Colin gave unstintingly of his time to talk about his work to the media and the public, sharing his passion for planetary science, no matter how early or late the hour.

He embodied enthusiasm for science and leaves a legacy of greater contact between the UK media and space science community, and overall, a higher profile for one of the UK's most exciting areas of research.''

Robert Massey, deputy executive secretary of the Royal Astronomical Society, which included Prof Pillinger among its fellows, said: "Colin was an inspirational planetary scientist. He wasn't afraid to challenge the establishment and get things done, and I think he's going to be remembered for that and the huge contributions he made in the field.

Personally, I will miss his presence and sense of humour.''

Not only did his work capture the public's imagination, he was incredibly warm and generous with his time, especially in inspiring younger generations of scientists to follow in his footsteps.

I'm sure the thoughts of everyone who had the privilege of meeting him will be with his friends and family at this time.''

Many took to Twitter to pay their respects. Science fiction author Keith Mansfield wrote: "Very sorry to hear about Prof Colin Pillinger. Great advocate for space and of course Mars.''

Space scientist Charles Laing tweeted: "Colin Pillinger was a true visionary, accomplished scientist and inspiration to those around him - sorely missed.''

The European Space Agency wrote: "Shocked and saddened to learn of the death of Professor Colin Pillinger.''

The Beagle 2 mission was estimated to have cost £50 million, with #5 million contributed by the UK government and £9 million by the ESA.

After the mission's failure Prof Pillinger spoke of his frustration and determination to see his dream of landing British technology on Mars come true, even after being diagnosed with primary progressive multiple sclerosis.

"We have unfinished business on Mars,'' he said after finding out he had the illness in 2005.

''The science is more important now than it ever was.''

He welcomed the successful landing of Nasa's Phoenix probe in 2008 but expressed frustration that while it had been rebuilt after an aborted attempt to land on the Red Planet several years earlier, his own mission was not given the same chance.

Prof Pillinger gained a PhD in chemistry from Swansea University in 1968 before becoming a research fellow at Cambridge.

He began his career at the American space agency Nasa, analysing samples of moon rock on the Apollo programme.

In 1991, he was appointed professor in interplanetary science at the Open University.

Prof Pillinger is survived by his wife Judith and children Shusanah and Nicolas.

The full statement from his family reads: "It is with profound sadness that we are telling friends and colleagues that Colin, whilst sitting in the garden yesterday afternoon, suffered a severe brain haemorrhage resulting in a deep coma.

He died peacefully this afternoon at Addenbrooke's Hospital, Cambridge, without regaining consciousness.

Please feel free to pass this message on to others who knew Colin, but we ask that all respect our privacy at this devastating and unbelievable time.''