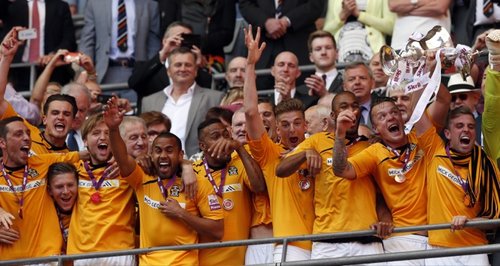 The result means The U's are now a Football League club again after an absence of nearly 10 years.

The official attendance was 19,313, with at least 11,000 Cambridge fans making the short trip down to London.

Cambridge went one nil up early in the second half through a Liam Hughes header.

Gateshead pulled a goal back, but Cambridge held on for the win.

Ryan Donaldson was voted Man of The Match, just as he was when The U's won the FA Trophy at Wembley earlier this season. 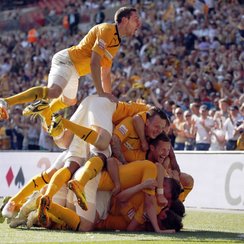 Donaldson, who swapped Gateshead for Cambridge last summer, almost gave the U's an early lead but Adam Bartlett was not to be caught cold and tipped away his long-range shot for a corner.

Richard Money's men threatened again after nine minutes but Luke Berry could not get enough on his diving header.

The Heed, who were 19th in the table when Gary Mills took over as manager in September but finished the season in third place, settled after their early scare and began keeping possession well and causing problems. 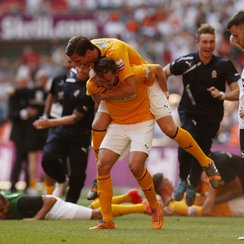 Smith, on loan from Premier League newcomers Leicester, had to be alert early in the second half to keep out another Marwood attempt.

Cambridge responded through substitute Harrison Dunk, whose shot was tipped wide by Bartlett, and they took the lead after 51 minutes when Donaldson's cross drifted over the keeper for Hughes to head home from two-yards out.

Bartlett pushed over another header from Hughes shortly afterwards as the U's sought a second goal.

It came in the 71st minute after Ben Clark brought down Donaldson, who got to his feet and curled home the resulting free-kick from 22 yards out.

It was Donaldson's third goal at Wembley this season after scoring twice in the FA Trophy win over Gosport.

Liam Hatch's header was parried by Smith and the 38-year-old nodded the loose ball home from close range.

An injury to Cambridge defender Ian Miller saw the U's finish the game with 10 men but, despite the fact almost 10 minutes of stoppage time was added on for the incident, Gateshead could not find the goal that would take it to extra time.