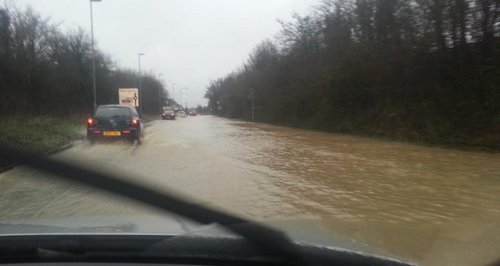 Uttlesford District Council says a number of 'severe flooding' incidents have been reported in the district.

This includes in Saffron Walden, where fire crews rescued ten people and two dogs from a block of flats.

Crews were called to Radwinter Road at around 5am this morning following heavy rain overnight.

A spokesperson for Essex Fire Service said: "Crews were called to a three storey block of flats with approximately 20 flats affected by flood waters.

Firefighters rescued eight adults, including two disabled people from a ground floor flat, two children and two dogs from the flooded block of flats, crews used the rescue boat to bring them to safety by 08:00hrs."

District Council 'Does Not Provide Sandbags'

The District Council is advising residents and businesses that it does not provide sandbags.

The authority says that anyone requiring them should contact their local parish council who may have a supply.

Councillor Jim Ketteridge, leader of Uttlesford District Council said: "This is an extreme case of flooding in our district and we want to urge residents to take extra care during this time.

Most importantly it is advised not to drive through any flood water and to call emergency services should you be affected."