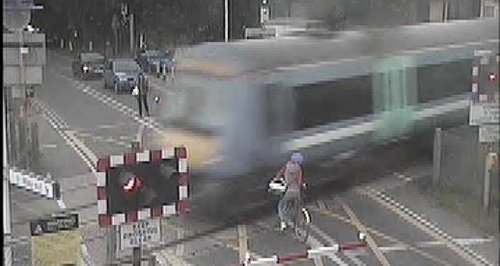 A woman who was captured on CCTV as she narrowly avoided being hit by a train in Cambridgeshire has contacted police.

British Transport Police released the footage of the incident, which happened at the Waterbeach crossing earlier this week saying it was one of the ''nearest misses'' they had ever seen.

The woman is seen approaching the crossing as the barriers are down.

She passes through the barriers and on to the line before braking hard.

Afterwards she is seen wiping her brow.

Police confirmed the woman had contacted officers and would be spoken to on a voluntary basis next week.

A spokesman for the British Transport Police said: "I'd like to thank the public and local community, as well as the media, for all their help and assistance in this investigation.

I hope the shocking CCTV serves as a stark warning not to misuse level crossings.''

The incident happened at about 6.30pm on September 12.