A Cambridge woman, gored in the neck by a stag, is back at work for the first time.

44 year old Doctor Kate Stone was left critically hurt after the accident in Scotland back in December.

She's had three operations, and is also eating properly for the first time in months.

Kate told Heart she feels lucky to still be alive, and now, to be back at work, "Only a few weeks ago I was breathing through a tracheotomy, I was eating through a tube in my nose, I had a neck brace on to protect my fractured neck, and in the last few weeks, they've been lifted. 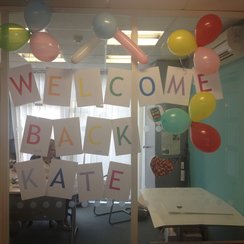 "I have been working from my hospital bed, and been doing things like conference calls when I've come out of surgery."

Kate also told us she's finally able to eat again: "I was really missing baked beans, so I've been eating a lot of those!

I'm a vegan, so I've been eating a lot of vegan meals, which include chips.

The first meal I had in the hospital was tomato soup.

The whole thing has been incredibly surreal."