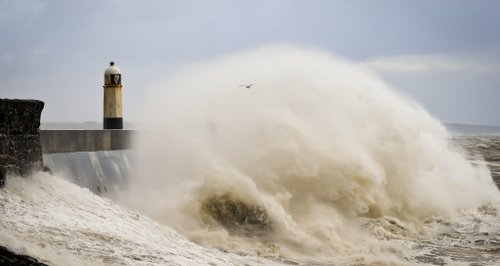 UPDATE 2nd January 2014: A search for a 27-year-old man swept out to sea on New Year's Eve has been called off after a body was found.

The man, from Surrey, had gone for a paddle with four friends in the sea at Loe Bar, near Porthleven, Cornwall having gone out for a walk on Tuesday night.

HM Coastguard said that when some of the group were up to their knees in the sea a large wave swept the man off his feet.

It was only when the friends returned to the beach they realised one of their group was missing and called the emergency services.

An air and sea search was launched on Tuesday night and continued yesterday but this morning a man's body was found on Porthleven beach.

Devon and Cornwall Police said a member of the public made the discovery at about 9am today.

A major search is under way for a man who was swept out to sea in the early hours of this morning.

The 26 year old man, who has not yet been named, was in the sea at Loe Bar, near Porthleven, Cornwall and was swept off his feet by a large wave.

One of the group he was with alerted Falmouth Coastguard, which mobilised rescue teams from Penzance, Porthleven, Mullion and Porthoustock, and RNLI lifeboats from Penlee and Lizard.

A helicopter from RNAS Culdrose also helped in the search in atrocious conditions.

Phil Mathias, Falmouth Coastguard watch manager, said: "The weather for searching has been particularly challenging and as the night has gone on, conditions have deteriorated."

The search was suspended at 4.30am, but resumed at first light with fresh search teams.