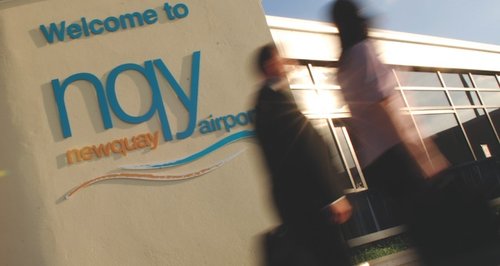 Space tourists could be blasting into orbit from Cornwall after Newquay Airport was named as one of eight possible locations for Britain's first spaceport in just four years' time.

It is the only site in England named on the shortlist for the spaceport, due to open in 2018.

All have to meet strict criteria, including being a safe distance from densely populated areas and a runway that can be extended to more than 3,000m.

The aim is to use the spaceport to launch tourists into space as well as commercial satellites.

By 2030, the Government hopes to capture 10% of the world's space market. If this target is met, opening up the UK tourism industry to specialist operators such as Virgin Galactic and XCor could be worth £40 billion and provide 100,000 jobs.

``In order to lead the way on commercial space flight, we will need to establish a spaceport that enables us to operate regular flights. The work published today has got the ball rolling - now we want to work with others to take forward this exciting project and have Britain's first spaceport up and running by 2018.''

There have been reports that the Government is hoping Virgin boss Sir Richard Branson will build the port as part of his Virgin Galactic project. Virgin Galactic's first flights are scheduled to take off from a purpose-built spaceport in New Mexico, USA, at the start of the year, with passengers paying £120,000 for a 150-minute flight that will climb to heights of around 62 miles (100km) to achieve zero gravity for approximately six minutes.

The spaceport will have its own dedicated and separate air space in order to manage flights into orbit safely.

After a period of consultation, further work will be done to develop those locations remaining on the site shortlist. Views of local people and other interested parties will be sought before any final decisions are taken.

In August 2012, the Government asked the Civil Aviation Authority (CAA) to look at potential sites that could meet the criteria for a UK spaceport.

``Space is big business for the UK. It already contributes £11.3 billion to the economy each year, supporting nearly 35,000 jobs. That's why it's important for us to prepare the UK for new launcher technology and take steps towards meeting our ambition of establishing the first British spaceport by 2018. Exploring the opportunities that commercial space flight presents, and potentially making strategic investments in this area, will support the growth of this thriving industry and underpin the economy of tomorrow, making the UK the place for space.''