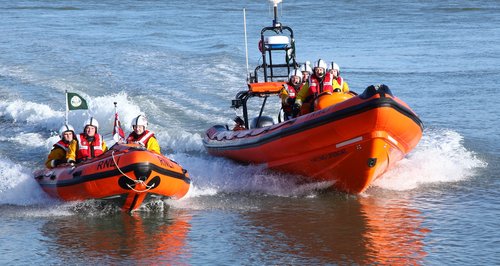 Two men dressed as Santa and a penguin had to be rescued at sea after they ran into difficulties during what they claimed was a charity row in a dinghy.

The pair, who later said they were fundraising for the Help For Heroes charity, had to be rescued as they tried to paddle from Marazion to Penzance in western Cornwall at 12.30pm on Saturday 28th December.

They had taken an inflatable boat and were saved by the coastguard after a "number of calls'' from concerned members of the public.

Following their rescue by the Penlee inshore lifeboat crew they were taken to safety at Newyln Harbour.

A spokeswoman for Falmouth Coastguard said: "We received reports that these two gentlemen had set to sea in a dingy and appeared to have run into difficulty.

"The coastguard went for observations and these two chaps were clearly in distress. The weather certainly was not ideal.

"They said they were they were taking part in a charity row for Help For Heroes, but clearly they were not dressed for the occasion. "We cannot say what they were doing - we are usually advised when charity rows happen but this time there was no official notification.''