Thousands of poppies, handmade by Cornish Schoolchildren were dropped from the tower inside the Cathedral.

The fall of 10,000 poppies was to represent each one of the Cornish war dead.

Truro Cathedral has been marking the centenary of the First World War in a number of ways with it's Cornwall Remembers project.

Schoolchildren from a number of Cornish schools have taken part in creating displays to honour those who gave the greatest sacrifice during the war.

They're on display inside the cathedral.

After a two minutes silence at 11am, the 10,000 poppies, which were all made by the schoolchildren, were dropped from the central tower balcony.

It took a further few minutes for the poppies to cascade to the floor, in a poignant moment of silence.

Roger Bush, the Dean of Truro said "on the back of the poppies, some of them have little prayers and it's been a terribly powerful and moving occasion.

"I think everyone was swept along by the very moving aspect of that, and that's something that'll live with me for many many years to come". 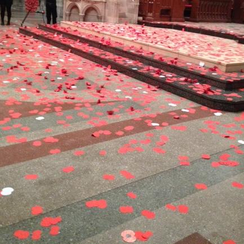