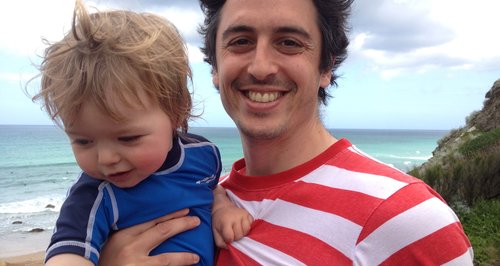 A father's praised the actions of a St Agnes Police Community Support Officer.

PCSO Richard Hill has been hailed a hero for stopping a car, with a baby girl inside, from rolling down a hill in St Agnes.

He saw a man frantically trying to stop the Audi A3 from rolling but the car was gathering pace, heading towards a number of pedestrians who would not have had chance to avoid the car at Traevaunance Cove.

He quickly drove his marked police car into the path of the oncoming car causing the Audi to collide with it, shortly before 10.40am on Saturday 14 June.

PCSO Richard Hill, based in Perranporth, said: "It was very much a case of right time, right place.

"Thankfully nobody was injured and the only damage was to the cars."

Simon Cohen, the car owner and father of 14-month-old Seren, said: "I am eternally grateful and would like to say a huge thank you for what he did.

There was slight body work damage to the door of the police car and minor scratches to the back bumper of the Audi.

The handbrake of the Audi is currently being tested to find out why it failed to work.