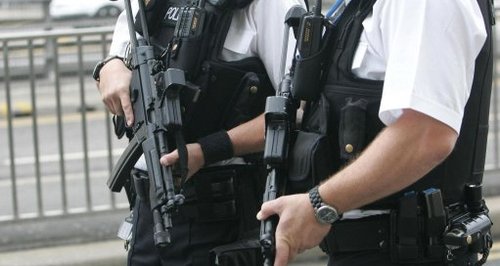 A 26-year-old man has been arrested in Cornwall on suspicion of a terrorism offence linked to Syria.

The Bangladeshi national was detained in Hayle on Monday night by officers from the South East Counter Terrorism Unit (Sectu) and Devon and Cornwall Police.

He is being questioned at a police station in the Devon and Cornwall area on suspicion of preparing for an act of terrorism.

A Devon and Cornwall Police spokesman said the arrest was "in relation to conflicts overseas'' and not linked to any immediate threat to local communities or other parts of the UK. A Sectu spokeswoman confirmed the arrest was related to the ongoing conflict in Syria.

"I would like to reassure the community that this investigation should have very little impact on local residents. The arrest was pre-planned and was not made in response to any immediate threat to public safety in Hayle. Our officers will continue to maintain a presence in the area, offering reassurance to the local community.''

A shop manager, who works in Fore Street, where the man is believed to have been arrested, said police remained in the area today. The woman, who did not want to be named, said: "We're all shocked. We can't believe it.''

British counter-terrorism police have made a number of arrests linked to the conflict in Syria in recent weeks.

A 21-year-old man was detained in Hackney, north east London, last Wednesday, while a 25-year-old woman in Bedfordshire and a 32-year-old man in London were questioned on October 22.

Three men and three women were also arrested in Portsmouth and Farnborough in Hampshire and Greenwich, south east London, on October 14.

A Sectu spokeswoman would not confirm whether the latest arrest was linked to any other case.

Anyone with information should contact police or call the anti-terrorist hotline on 0800 789 321.