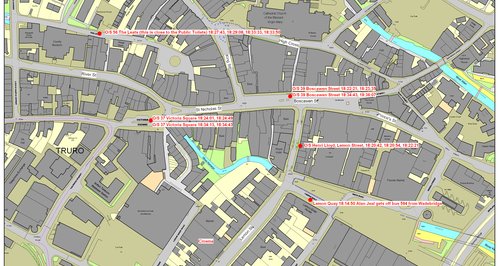 A sock was found in the mouth of a man whose naked body washed up on a beach in Cornwall, police have revealed.

He was only wearing socks and one walking shoe when his body was discovered by a dog walker.

A post-mortem examination found multiple injuries on Mr Jeal's body which are inconsistent with drowning.

Police, who are treating the death as "suspicious'', believe Mr Jeal may have been murdered, committed suicide or suffered an accident.

Detective Chief Inspector Dave Thorne, senior investigating officer at Devon and Cornwall Police, said: "We can't think of an explanation as to why it would be there and this is one of the reasons we are treating Alan's death as suspicious.''

Detectives have released a map and a series of CCTV images showing a man, believed to be Mr Jeal, in Truro city centre the evening before his body was discovered.

It is believed Mr Jeal, who lived alone and was not reported missing, took the number 594 bus from Wadebridge to Truro, arriving in the bus station at 6.14pm.

He was seen walking towards the public toilets at The Leats and was last seen at 6.36pm in Boscawen Street, Truro.

Officers are now trying to establish where Mr Jeal, from Wadebridge, went after that and how he travelled to Perranporth.

Anyone with any information that could assist with the investigation is asked to call police on 101 quoting log 381 of 1 March, or alternatively call Crimestoppers anonymously on 0800 555 111.