It's been launched in Lostwithiel, with water rescue teams demonstrating how they'd rescue someone trapped in their car which is stuck in floodwater. 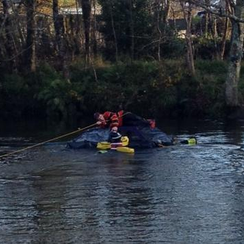 Every year thousands of motorists risk their lives by driving through floodwater. November and December are the busiest months for Cornwall fire service's flood rescue team.

In the last 2 years the number of rescues the teams perform has doubled. In the winter of 2012, they carried out 25 rescues from water -  that's an increase of 25% on the year before.

A car can float in as little as 60cm of water, and just 30cm of flowing water is enough to move a car.

Cornwall Fire and Rescue Service say the number of call outs they receive is mainly down to:

The main advice of the campaign is to educate drivers to make better decisions when faced with extreme weather and flooding.

NEVER drive through water if you are uncertain of the depth.

NEVER enter water that is higher than the bottom of your car.

DO NOT try to cross fast moving water.