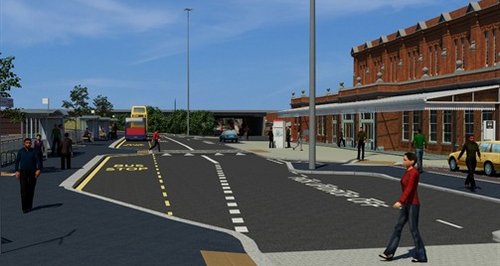 It will soon undergo works to make the area more accessible and welcoming for the millions of visitors and commuters who travel via the Interchange every year.

Members of the public are invited to view the plans at a special two day event where there will be the opportunity to learn more about the improvement works, and speak direct to the officers working on the project.

The preview event will be held at the BU Executive Business Centre, 89 Holdenhurst Road, Bournemouth, on:

Delivered as part of the Council's Three Towns Travel programme, and working in partnership with South West Trains, the works are due to start in January 2015 and will run until late Summer 2015.

"We are very pleased that by utilising additional government funding, and with investment through our partner South West Trains, we are able to make these improvements to one of Bournemouth's key transport hubs. Millions of people travel through Bournemouth Travel Interchange every year, therefore it is important that we provide people with improved and more accessible facilities.

"Through the Council's Three Towns Travel project we are aiming to give residents, visitors and commuters improved sustainable travel options so that we can encourage more people to travel by bike, bus, train and walking. The improvements at the Interchange will see significant changes to the layout providing a better experience for those arriving by coach and train and who are also looking to travel elsewhere in the town.

"I would like to invite people to visit the preview events as this will be an ideal opportunity to view the plans in more detail and speak to the officers leading on this key Three Towns Travel project."

"We are delighted to be working with Bournemouth Council on improvements to the station. The enhancements planned will make the station more welcoming for commuters and visitors alike. They include reducing the impact of the existing canopy to help create a lighter, brighter appearance and an extension to the booking hall to help reduce congestion. This investment will improve the experience for all of our passengers."