18 Horses Rescued From Flood In Christchurch 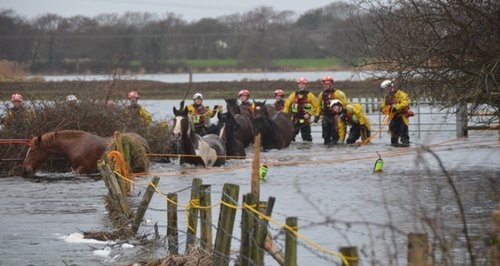 The RSPCA's water rescue team has rescued 18 horses from a flooded area in Christchurch, Dorset.

Beginning at 7.30am this morning (February 6) the operation involved 17 of the charity's specially trained water rescue officers as well as two chief inspectors and an equine officer.

They set up a corral at the location in the Stony Lane area followed by rope fences across the water to form a channel for the horses to go through and enter the corral area.

Most of the water was two feet deep but there were deeper places where the horses had to swim for five to six metres.

"We had been taking food out to these horses and have been monitoring them since the area flooded as they were healthy and we hoped that flood waters would recede.

"However, it became clear that, with the worsening weather and further rain forecast we had to take the decision to move these horses.

"The horses did not want to go through the deeper waters and we had to urge them on.  The actual rescue took about two hours as we had to be extremely careful to minimise the risk to the animals as well as to ourselves.

"We're pleased that the rescue was successful and that the horses are home and dry."

The horses were loaded onto trailers and their owner has taken them to another area.  The RSPCA has arranged to follow up on their progress.

The operation follows a rescue of seven horses from the same area early last month.

Regular trips across the water by RSPCA officers had delivered more than 100 bales of hay to the stranded horses in total.