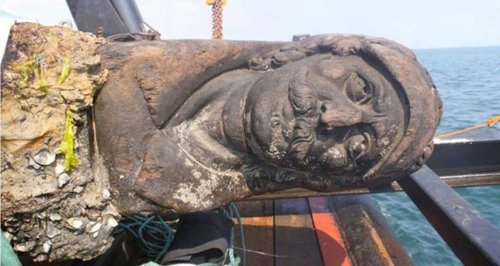 An elaborately carved rudder which has sat on the seabed of the English Channel for more than 400 years has been raised by archaeologists in Dorset.

The rudder, which features a man's face carved into the wood, is part of the so-called Swash Channel Wreck, thought to have been a Dutch trading ship which sank in the early 17th century.

Very little is known about the ship, which was discovered on the seabed near Poole Harbour.

Archaeologists from Bournemouth University have been leading a project to protect, excavate and piece together the history of the wreck.

Dave Parham, a senior lecturer in marine archaeology at the university, said:

"This is the first time this rudder has been seen above the surface in more than 400 years.

"It's a spectacular object, with a human head carved in one end.

"There are no others of this type that have been found in the UK, and it is unusual for one like this to be recovered in its entirety - it is 8.5 metres long and weighs around three-and-a-half tonnes.''

The Swash Channel Wreck project has been running for the past seven years, and artefacts recovered from the wreck so far include cannons, leather shoes and wooden barrels.

Other parts of the ship, including wooden carvings and a canister of cannon shot, have already been lifted from the seabed.

The rudder is the last major part of the ship due to be raised, and the remaining parts of the wreck have been covered with sand to protect it from seawater.

The rudder will now go to York for two years for conservation before going on display in Poole Museum.

"We've only recovered around 4% of the wreck and the rudder is the single largest object that we've raised,'' Mr Parham said.

"It's the culmination of seven years of hard work and it was a very moving experience.

"It's a pleasant relief that it has all gone well.

"It is the ship itself that is significant - there are only a few wrecks like this in the world, and it tells us more about the beginnings of the large-scale international trade.''

The Swash Channel Wreck project is a partnership between Bournemouth University and the Borough of Poole Museum Service and has been funded by a £141,200 grant from the Heritage Lottery Fund.