An armed robber's escaped with cash after raiding a bookmakers in Bournemouth.

It happened at around 5.45pm on Wednesday 3 December 2014 in Ladbrokes at Portman Terrace on Seabourne Road.

The offender, believed to be male, entered the shop wearing a hat or balaclava to hide the face and was brandishing a baseball bat.

He stole a quantity cash from the tills and made good his escape on foot. He was last seen running toward Fishermans Walk.

He is described as six feet tall and was wearing a black hooded jacket. 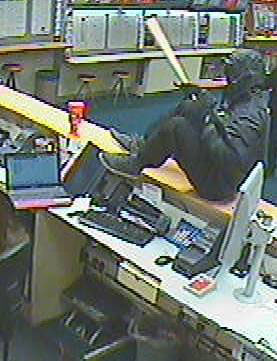 Detective Constable Christian Bryant, of Bournemouth police, said: "I am able to release images of the suspect and I would like to hear from anyone who recognises the person pictured maybe by the clothing or stature.

"I would also like to hear from anyone who may have seen the offender entering or leaving the shop or running away from the area.

"All calls will be treated in strict confidence.

"There is nothing to suggest at this time that this incident is linked to the one at Londis in Palmerston Road on Monday 1 December 2014 as the descriptions are quite different."