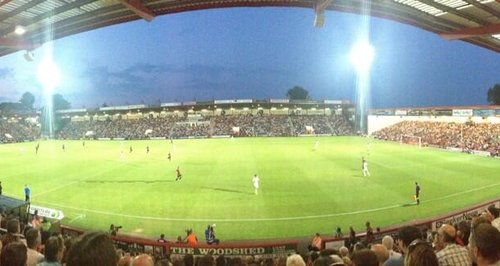 Bournemouth's been graced by some of the world's biggest football stars.

It ended in a 6-0 win for Real Madrid with Cristiano Ronaldo scoring two goals - but Cherries fans have described it to Heart as 'amazing' and 'magic'.

Bournemouth fans queued at the stadium and some camped overnight for tickets to the game.

The council says the friendly match is a massive boost to the local economy.

Despite the result, Bournemouth boss Eddie Howe hopes the game will have positive implications for the club in the future.

Howe was upbeat about the relationship that developed between the clubs over the weekend and hopes it may work in their favour further down the line:

"I got the chance to chat to [Real Madrid manager] Carlo Ancelotti which was a real treat for me.'

"Hopefully they enjoyed the game here and hopefully we can build good links between the clubs.

"You can't have too many good relationships with people in foreign leagues and who knows what the future holds?

"Certainly they've been very good with us and hopefully the relationship between the clubs has improved.''

The Cherries started strongly and more than held their own for the first 20 minutes before the goal rush began and despite the quality of the opponents Howe revealed his dressing room was still an unhappy one at the final whistle.

"It is a horrible feeling no matter who you lose to. We are not downhearted but we are disappointed.

"From our perspective we knew it was going to very difficult and we didn't want to change anything too much so we could test our players with our style of football.

"It was a great experience for our lads.