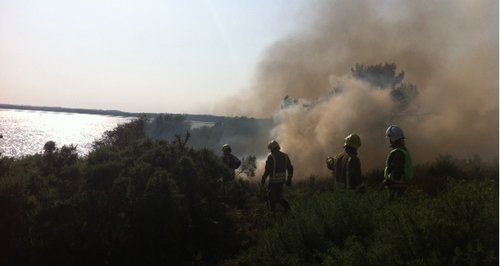 A 16 year old boy's been arrested on suspicion of arson by police investigating two big heath fires in two days in Poole.

The first at Canford Heath was reported to Dorset Fire and Rescue Service at around 10.30pm on Tuesday 16 July.

Less than 24 hours later, more than 50 firefighters were called to Ham Common - at 3.40pm on Wednesday afternoon (17 July).

7 fire engines, 7 Land Rovers and the Dorset police all terrain vehicle (Unimog) from across the area were all involved.

The fire was put out shortly before 11pm and we're told around a hectare of heath has been destroyed.

“This arrest demonstrates our commitment to a robust investigation of these alleged offences and we continue to appeal for witness to contact us on 101 in strict confidence.

“We continue to work closely with our partners to protect the public and the delicate heathland environments from the danger and long term damage that fires like these cause.

“Dorset Police, Dorset Fire and Rescue Service, Urban Heaths Partnership Wardens and volunteers continue to patrol in key heathland areas. I ask the public to remain vigilant and to report any suspicious behaviour especially in the prevailing hot and dry weather conditions.”