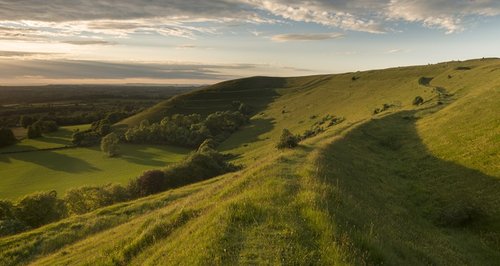 A massive and "magical'' Iron Age hill fort in Dorset has been bought by the National Trust for the nation.

Hambledon Hill, near Blandford Forum, has a rich natural and archaeological story dating back to before the construction of Stonehenge, the National Trust said.

The Iron Age fort, the first the trust has acquired for 30 years, was built more than 2,000 years ago and overlies one of the most significant early neolithic landscapes in western Europe dating back almost 6,000 years, the trust said.

Hambledon Hill stands at twice the height of the White Cliffs of Dover and covers an area the size of 50 football pitches. From the summit of the fort it is possible to see three counties - Dorset, Somerset and Wiltshire.

As a site which has escaped the advances of agriculture, its archaeological features are still well preserved and it is home to a range of wildlife, including half the UK's butterfly species.

Causeway enclosures seen on the hill date back 5,500 years, and together with nearby National Trust-owned Hod Hill the site tells the story of the beginnings of farming, the need for defence and the arrival of the Romans in Britain, the trust said.

The fort is also a national nature reserve, with 28 species of butterfly including the Adonis blue, dark green fritillary and green hairstreak recorded on the nationally important chalk grassland site.

And it is home to at least five species of orchids, including the autumn lady's tresses, as well as glow worms, brown hares, kestrels and meadow pipits.

"The beauty of a magical place like Hambledon Hill is the combination of a rich natural and archaeological story that goes back thousands of years.

"Wandering around a site whose human history pre-dates Stonehenge and takes you back to the early days of farming makes the heart skip a beat.

"The sound of a skylark ascending above the rich grassland and sight of a cloud of Adonis blue butterflies in flight touches the soul. This is a place where you feel totally connected to the world around you.''

"When I come here I feel like someone would when they go into St Paul's Cathedral.

"When there is no one else around and I sit on the top of the hill looking at the view I feel very privileged. And to play a small part in looking after the hill is a good feeling.''

Hambledon Hill has been owned for the last three decades by the Hawthorn Trust and managed by Government conservation agency Natural England as a national nature reserve.

The purchase is being funded by a land purchase grant from Natural England and with money from a legacy left to the trust for the countryside in Dorset, and brings to seven the number of hill forts owned by the trust in the county.