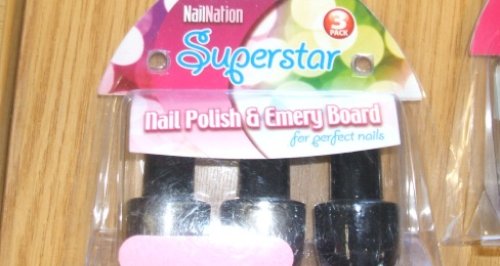 An importing business that sold unsafe nail polish sets in a Weymouth shop has been prosecuted by Dorset County Council’s trading standards service.

At Weymouth Magistrates’ Court, on Monday 17 March, 99p Stores Limited of Northampton, pleaded guilty to an offence under the Consumer Protection Act 1987 of supplying an unsafe own brand “NailNation Superstar Nail polish and Emery Board” set in breach of safety regulations.

The product failed the Cosmetic Products (Safety) Regulations 2008 because it contained the prohibited harmful substance Bis (2-Ethylhexyl) Phthalate (DEHP), in each of the three nail polishes in the set.

There is evidence that the Phthalate DEHP can impair fertility, or result in developmental toxicity to an unborn child, and it is reasonable to expect that nail polish users may put their nails in their mouth.

The nail polish set was purchased as part of a trading standards project checking cosmetics for the presence of phthalates.

99p Stores Limited were fined £3,500 and ordered to pay prosecution costs to the county council of £994.

In mitigation the company confirmed that the offending items had been taken off shelves across the country as soon as they were alerted to the problems. In sentencing the company the magistrates took this into account together with their early plea of guilt.

"They are legally responsible for checking that all cosmetics are safe before distributing them. Once prohibited goods have been distributed and sold it is very difficult to ensure these do not put consumers at risk.

"Importers need to be vigilant and diligent and where consumers’ safety is put at risk by their failures formal action is always a consideration for us.

“Our trading standards officers are in regular contact with Dorset-based businesses and provide advice to help them comply with safety requirements.

"This work helps support local business and protects consumers. If any local supplier is unsure of their legal requirements I would urge them to contact the trading standards business advice line on 01305 224702 for guidance.”