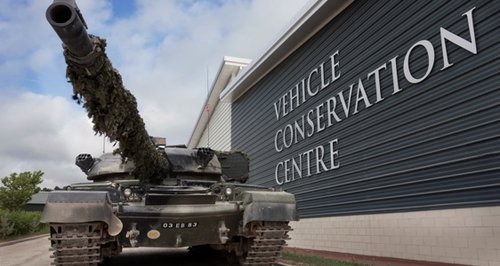 After rumours that Brad Pitt recently visited the Bovington Tank Museum in Dorset to research his new war film, a new 2 and a half million pound attraction has opened there.

The 40,000 sq. ft. Vehicle Conservation Centre, which will house over 100 armoured fighting vehicles, was built with the assistance of a £2.5m Heritage Lottery Fund (HLF) grant.

The new hall includes a public observation gallery and `Conservation in Action` exhibition, and will contain vehicles which have never been on public display before.

"The Vehicle Conservation Centre will provide us with much needed space; enabling us to add new exhibitions, and ensuring that our collection is stored in a dry and properly heated environment.

"This new centre also gives us the facilities for an on-going volunteer led conservation and preservation programme, further guaranteeing the long term future of our collection."

"The Tank Museum holds one of the, if not the finest collection of tanks and armoured fighting vehicles in the world. We are thrilled that this project is now open to the public and will provide new facilities to help conserve vehicles, whilst transforming the way visitors interact with The Tank Museum's impressive collection.

"This is a great opportunity for everyone to get involved and learn about these complex machines and is bound to increase the number of visitors to this ever popular museum.

"In the run-up to the Centenary of the First World War, where tanks played a historic role in the conflict, this project is opening just in time for commemorations in 2014."

The attraction officially opened on Wednesday September the 18th.

It was rumoured that Hollywood superstar Brad Pitt visited the museum recently to research his new World War 2 film "Fury", but that's not been confirmed by the museum itself. It's claimed he got to drive a tank around a field under instruction.

The movie, about the five man crew of a tank in the final weeks of the war, is currently being filmed in London.