Bournemouth householders who have a ‘Big Bin’ and a ‘Little Bin’, will soon receive a food waste container and a small kitchen caddy in readiness for the new food waste collections which will start on 3 March.

Along with their new containers, residents will also receive a roll of compostable liners for the kitchen caddy and an instruction booklet. Deliveries of the new containers will continue until mid-February.

Once they have received the new containers, householders will need to store them safely unused until the week before their first collection during the week beginning 3 March.

The food waste will be collected weekly at the same time as the general rubbish.

The small kitchen caddy can be stored inside the home to reduce trips outside to the large container.

Residents will be able to use their containers to collect not only uncooked vegetable and fruit waste and eggshells but also cooked food, meat and fish bones, as well as food that is no longer edible.

Georgina Fry is the waste and resource projects manager for Bournemouth Borough Council:

“All forms of food waste can be put into the new food waste containers, not just that which would normally be put on a compost heap. This is because the separated food waste will be treated so that cooked food, bones, etc, break down much more quickly and can still be used as a high quality soil improver.

"Additionally, the by-products of the process can be used to generate electricity, so it is also a renewable energy resource.”

The food waste collections are another way in which Bournemouth residents can waste less and recycle more.

“Bournemouth residents are already recycling a large amount of their waste, but currently 38 per cent of the contents of the general rubbish in Bournemouth is food waste that could be used as a resource.

"We’ve tried to make separating food waste as easy as possible, so, for example, the larger food waste container has been especially designed for us to give householders the option to either keep it in their ‘Little Bin’ so cutting down storage room required, or to stand on its own if the householder prefers to keep it that way.

"It has a lockable lid to stop animals rummaging through the contents. The kitchen caddy allows the household to separate food waste from the general rubbish as they dispose of it, and minimise trips to the outside container.” 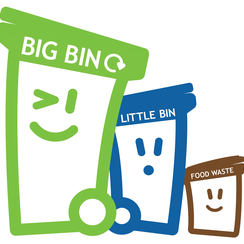 Bournemouth residents who live in either private, council or housing association blocks of flats with communal bins will need to opt into the new collections to receive their food waste containers.

When residents sign up for the scheme, a waste awareness officer will visit to make sure that residents get the correct containers and receive advice on the new scheme.

Residents can join the scheme either by calling 01202 451199 or emailing recycle@bournemouth.gov.uk.

There will be opportunities to meet the waste and recycling team and get further information about the new food waste collections over the next few weeks:

Further information and updates are also available on the Bournemouth Borough Council website at www.bournemouth.gov.uk/foodwaste and on Facebook www.facebook.com/recycleforbournmouth.