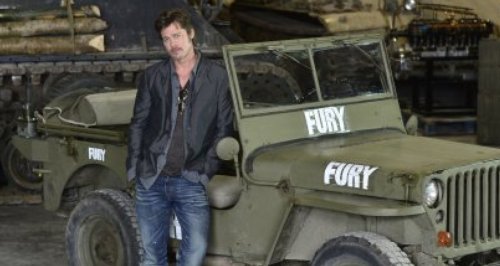 Brad Pitt's flashed his wedding ring at a Dorset museum - just days after tying the knot in France.

The 50-year-old Oscar winner braved pouring rain to attend the event at The Tank Museum in Bovington in Dorset.

Pitt wore dark sunglasses as he entered the site to promote Second World War film Fury, in which he plays a battle-hardened army sergeant.

He removed his shades and posed for pictures beside Logan Lerman, Jon Bernthal and David Ayer, writer, director and producer for the film.

The photocall came days after Pitt wed Angelina Jolie at the Chateau Miraval in France, in the presence of the couple's six children.

Pitt was photographed wearing a gold ring on his wedding finger during the museum event. 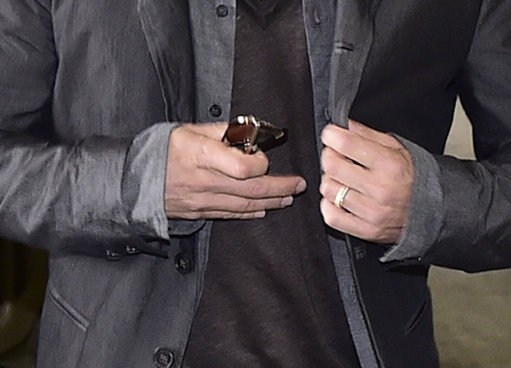 Fury, set in 1945, also stars Shia LaBeouf and Michael Pena as an American crew embarking on a deadly mission behind enemy lines.

Pitt plays army sergeant Wardaddy, who commands a Sherman tank and a five-man crew on the assignment.

Wardaddy and his men are outnumbered and outgunned and face overwhelming odds in their heroic attempts to strike Nazi Germany when a rookie soldier is thrust into their platoon.

The film will be released nationwide on October 24.

The couple, dubbed Brangelina, previously said they would not tie the knot until all couples were able to marry.

Speaking to Esquire magazine in October 2006, Pitt said: "Angie and I will consider tying the knot when everyone else in the country who wants to be married is legally able.''

Pitt was engaged to Gwyneth Paltrow before meeting Aniston, whom he divorced in 2005 after five years of marriage.

Following the divorce, t-shirts bearing the slogans Team Aniston and Team Jolie became fashion must-haves in the US.

Pitt and Jolie announced their engagement in 2012, with Pitt's manager describing it as ``a promise for the future'' at the time.

The jeweller went on to design numerous pieces with Jolie, including a ring for the actress to wear during premiers of her film Maleficent this year.

All proceeds from the ring will go to charity, a statement on Procop's website states.