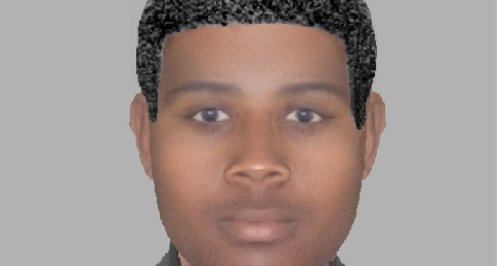 Police are looking for a man who conned an elderly woman from Poole out of thousands of pounds.

At around 10am on Monday 3 November 2014, the victim received a phone call from a man pretending to be a police officer from London.

The victim, aged in her 70s, was told fraudulent transactions had been made on her bank account. She was instructed by the man to go to her bank, withdraw a substantial amount of money from her account and return home to wait for a plain-clothed police officer to collect it so it could be reimbursed into her bank account.

At 12.30pm a man arrived at the victim’s address in the Herbert Avenue area and collected the money.

“I am now in the position to release an e-fit of the offender which I am keen to identify as soon as possible.

“I would urge anyone who recognises this man to contact Dorset Police.”

The offender is described as black, aged 20, of medium build and approximately five feet five inches tall. He had black curly hair.

Officers believe this crime is linked to an ongoing money scam in Dorset and other parts of the country in which elderly victims are targeted with fraudulent phone calls. It is likely the suspects are coming into Dorset from other areas.

The scam involves victims receiving a call from someone purporting to be a police officer or from their bank, advising them of alleged fraudulent transactions on their accounts. They are then advised to phone the customer services department using telephone numbers from the rear of their cards. No account details are requested.

The victim then hangs up and calls the number as suggested and speaks to a different voice who advises them to make transfers to a newly created account and assures confirmation details will be forwarded.

It appears the initial caller may not be hanging up, keeping the phone line open and the victim then believes they have connected to a legitimate bank number after dialling out.

“These are callous offenders targeting the most vulnerable members of our community.

“I would like to stress that the police, no matter which force, would never ask anyone to hand over cash or cards to a courier or anyone else.

“I urge residents, when contacted by anyone trying to persuade them to hand over or transfer money, not to agree to any such arrangements and to inform Dorset Police on 101 at the earliest opportunity.

“I would also ask family members and neighbours to report any concerns to the police. I strongly urge everyone to be vigilant and make sure they take note of our crime prevention advice.”

- Do not reveal your bank details including PIN to anyone – banks will already have these details and will never ask for your card back.
- If you receive an unexpected call from someone claiming to be from your bank, do not give them any details, hang up and call your bank on their regular contact telephone number – using a different telephone and phone line.
- Do not give your bank cards to strangers whatever reason they may give you to part with them.
- Do not allow any unknown or unexpected callers inside your home. If you are suspicious, call 999 immediately.
- Do not hand over any cash to people unknown to you.
- Report these crimes to police by calling Action Fraud on 0300 123 2040.

Witnesses and anyone with information should call Dorset Police in confidence on 101 quoting incident number 3:273. Alternatively, call the free and anonymous Crimestoppers line on 0800 555 111 where mobile phone tariffs may apply.