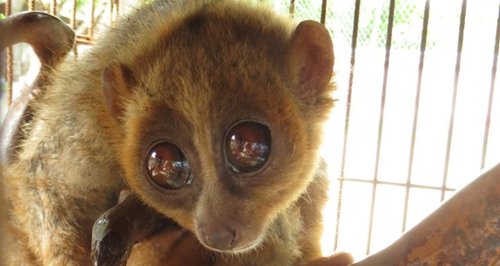 A vulnerable primate's been flown more than 5,000 miles from the Maldives to start a new life at Monkey World in Dorset.

Kalo (meaning "Buddy" in Maldivian) was confiscated in January of this year as part of a drugs raid in the Maldive Islands.

Since January the Maldividan authorities have been trying to find a home for the loris and a way to transport this protected species, but no one in the international community was able or willing to help.

Dr Alison Cronin, Director of Monkey World, agreed to organise the paperwork, arrange the transport, and quarantine Kalo the slow loris at the Dorset rescue centre.

British Airways came to Kalo's assistance and flew him and Dr Cronin more than 5,000 miles back to UK. They landed safely at Gatwick airport late at night.

Dr Cronin said "It was a priority to assist the Maldividan authorities who have done an excellent job in enforcing the international treaty that protects endangered species around the world and of course we wanted to save Kalo as he may have had to be put down if a suitable and legal home was not found for him".

Kalo has settled into his new Dorset home well.

"He has muscle wastage from living in a small bird cage since he was stolen from the wild and his coat is dirty and sparse.

"His condition should improve dramatically in the coming weeks as he is climbing around his new home and eating loads of crickets and locusts" said Dr Cronin.

Where Kalo was originally smuggled from remains a mystery as his former drug-smuggling owner refuses to give any information about the loris.

He could have come from several different countries in Asia. The final mystery surrounding Kalo is his sex! It is not easy to tell boys from girls by just looking at them.

The team at Monkey World should be able to confirm if Kalo is developing into a male or female in the coming days as they have infra-red CCTV cameras watching this nocturnal VIP.