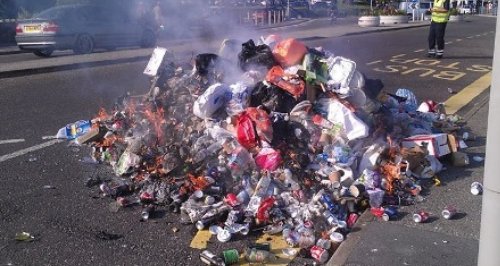 People are being warned not to throw away still-hot barbecues - after rubbish in a bin lorry caught fire in Poole.

Thousands of visitors have been flocking to Poole's beaches during the heatwave - but they've been leaving tons of rubbish.

The council's asking people to make sure they take their litter with them when they leave the beach.

Many people are also having beach BBQs with friends, but over the weekend, the inside of one of Poole's refuse vehicles caught fire due to a barbecue being binned while it was still alight.

The council's appealing to people not to throw away BBQs which are still hot.

"Our beaches are fantastic and everyone in Poole is very proud of them.

"When the sun is shining there is no place better to be than with friends and family, but it is really important that everyone does their bit to keep our beaches clean and help maintain the Blue Flag status we all work so hard to achieve.

"I would ask people to please throw all rubbish in the bins at the end of the day rather than just walk away and leave it on the sand.

"Aside from the fact that litter is an eyesore on our beaches and unpleasant for other people, if left, it gets swept out to sea creating hazards for our very important sealife."