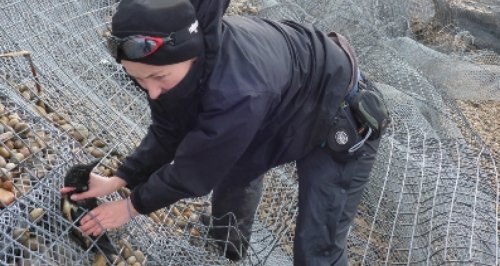 The Dorset Wildlife Trust says more than 100 dead and injured seabirds have been found washed up on Chesil Beach at Portland, following the recent storms.

Birds such as Razorbills, Guillemots and two Kittiwakes have been found. Five dead puffins, which are species of European conservation concern, have also been washed up. Some of these birds were covered in oil, and those found alive are exhausted and need time to recover. Concerned conservation officers have been able to rescue some of the stranded birds. A trapped razorbill, stuck inside an empty gabion (a metal cage filled with shingle to stabilise the shoreline) was freed by Angela Thomas, Assistant Warden at the Chesil Bank and Fleet Nature Reserve.

"The force of the waves had emptied the shingle from the metal cage, but somehow a Razorbill had become trapped inside - it was hard to get it out, and we had no idea how it got in there.  It would not have escaped without our help, so we're glad we managed to spot it."

"Whilst we usually see dead birds washed up on the beach in the winter, these storms have made life much harder for them.   Birds being found alive are tired and hungry because they are weak from fighting against the harsh conditions.

"The death of these birds is an even bigger blow after the huge loss during the PIB incident last year, where over 1000 seabirds were found dead on the South Coast, covered in a deadly sticky glue substance. It is sad to find more dead birds along Chesil Beach, but an inevitable consequence of the storms and high tides."

Chesil Centre Officers will be monitoring the beach to try and rescue as many birds as possible, but Dorset Wildlife Trust is advising the public not to touch dead or injured birds.