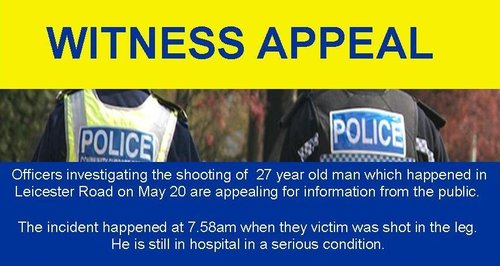 Detectives in Luton are conducting a 2nd week anniversary appeal on Monday, June 3, in connection with a shooting that happened in Leicester Road.

Detectives in Luton are conducting a 2nd week anniversary appeal on Monday, June 3, in connection with a shooting that happened in Leicester Road.

The incident happened at the junction of Dunstable Road on Monday, May 20 at 7.58am when the 27 year old victim was shot in the leg.

The victim remains in hospital undergoing extensive treatment to his leg and is described as being in a serious but stable condition.

Last week officers released photo-fit images of the offender based on descriptions given by some members of the public.

During Monday’s appeal, exactly two weeks after the incident, officers will out and about in the area again, speaking with residents and motorists and hoping to jog people’s memories by giving out copies of the photo-fit images directly to the public.

Detective Inspector Iain Morgan, leading the investigation, said: “The appeal will take place between 7.30am and 8.30am which will coincide exactly with the time of the shooting. Hopefully officers will be able to speak with people who use this route to work or school on a regular basis. The images may help jog the public’s memories or someone may be able to help identify the offender from the information in the leaflets we will be giving out.”

He continued: “The victim remains in hospital and has suffered life changing injuries as a result of this shooting. His family are devastated by what has happened and I would appeal to members of the public who have information about this inquiry to come forward and tell the police what they know. Everything possible is being done to track down those responsible for this crime and I would remind people that a £1000 reward is available to anyone who can provide information that leads to an arrest and conviction of people for gun crimes in the county.”

Anyone with information relating to this crime can contact Bedfordshire Police, in confidence, on 101, or text information to 07786 200011.