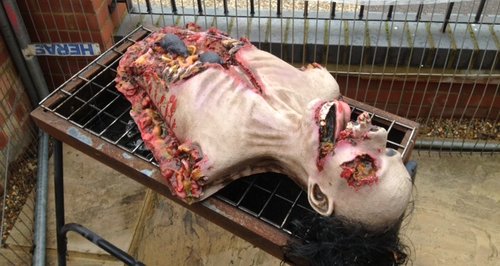 Police have asked a man in Stevenage to rearrange his Halloween display after someone complained it was too gruesome.

James Creighton has been putting the decorations on the front of his house for three years to raise money for charity after losing his grandmother to cancer:

"I absolutely love Halloween, when I was a kid my mum and nan used to do a party for me and my friends and ever since then I've loved it"

Hertfordshire Police say they have received one call that referred to one decoration specifically, a fake corpse.

Police say a parent complained it scared their child.

Officers went to Mr Creighton's house on Grove Road and helped him move this decoration behind a fake blood stained sheet would keep it out of a child's eye line.

Mr Creighton told Heart he's never had a complaint before, he claims most people like his display:

"Its different and no one seems to have seen anything like it before, everyone seems to enjoy it and I've not have any other problems"

He's now worried more people will complain and it will lead to him having to take down the decorations before Halloween.

A spokesperson for Cancer Research UK in Hertfordshire, said:

“Our supporters come up with a variety of unusual stunts and events to raise money for our life-saving research, but we would never encourage anyone to do anything which could cause offence”.