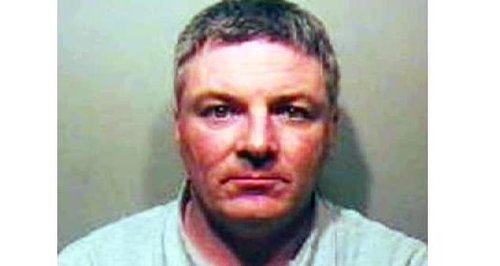 An ex-soldier who caused a five-hour armed siege in Leighton Buzzard, Bedfordshire, has been jailed for two years.

Marc McLees (pictured), who was suffering from Post Traumatic Stress Disorder, threatened the police with a ball bearing gun from his flat after downing 10 pints of lager on his birthday on Tuesday 5 February 2013.

The army veteran of Northern Ireland, Iraq and Afghanistan thought he was in a "war zone".

On Tuesday 13 August 2013, he was jailed for two years by Judge Richard Foster at Luton Crown Court.

Prosecutor Deborah Minnett said Jennifer Knowles, his neighbour in flats above a soft furnishing store in Bridge Street heard "moaning and sobbing" as if someone had died at 4 o'clock in the afternoon.

Twenty minutes later, McLees appeared at her front door. He was red in the face, his eyes were bloodshot and he was under the influence of alcohol. He told her he was a bad person and that she and her 16 month old child should "get out."

Armed police were called and a siege began. After two and a half hours the mother and child were able to get safely from the building, but McLees remained inside.

He shouted to the police: "Come on coppers. Come and get me" and threw a wine bottle out of the window onto the pavement, threatening to shoot the officers.  Appearing at the window with the BB gun, he said: "Do you want some of this?"

McLees, who served with the Sutherland Regiment, told the trained negotiators that he had rigged the doors and windows with Semtex explosives.

After five hours, he gave himself up after speaking to his sister on the telephone. When questioned, McLees apologised and expressed his remorse. There were no explosives in his flat.

McLees, 42, who appeared by a video link from Bedford jail, pleaded guilty to possessing an imitation firearm on the evening of Tuesday 5 February 2013. He had denied a charge of communicating false information about a bomb hoax, which was accepted by the prosecution.

Will Noble, defending, said: "It is a tragic case. He acted completely out of character and had a mental breakdown. He spent 18 years as a soldier serving in Northern Ireland, Iraq and Afghanistan. He has been involved in counter-terrorism and close protection duties where he was exposed to harrowing and appalling experiences."

After leaving the army, he was unemployed and suffered from Post Traumatic Stress Disorder. His marriage ended and he became homeless and lost his self-esteem. Since being remanded he had been an exemplary prisoner, said Mr Noble.

Mr Noble went on: "February 5th was his birthday, but he is unable to say what triggered his behaviour that afternoon. He describes an out of body experience in which he believed he was back in a war zone."

McLees is now supported by a new partner, the British Legion and PTSD Resolution. "It is a great irony that the support available to ex-servicemen does not come into play until something like this happen" he said. The former soldier is being helped with accommodation, therapy to combat stress, education and training as well as financial support.

Jailing him, Judge Richard Foster said: "You had an exemplary service record in the army. You have served in Northern Ireland, Afghanistan and Iraq for your Queen and country. People must be grateful to you and you should be rightly proud.

"It is tragic that you are in prison. There is no doubt you suffer from Post Traumatic Stress Disorder."

But the judge said the 5 hour siege, which was fuelled by drink, must have caused fear to his neighbours, the public and the police.