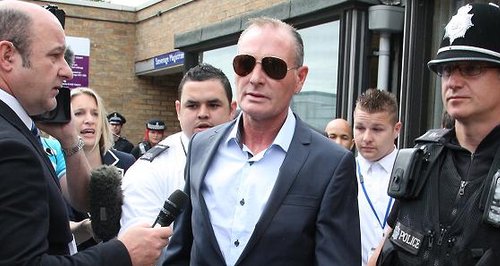 Former England football star Paul Gascoigne's been fined more than £1000, a month after being arrested at Stevenage railway station.

The 46 year old pleaded guilty to being drunk and disorderly during a hearing at Stevenage Magistrates' Court on Monday 5 August 2013. He also admitted assaulting a ticket collector.

Gascoigne, who has battled alcoholism for many years, was fined £600 for one charge of assault and £400 for the drunk and disorderly charge.

He was also ordered to pay £100 in compensation to ticket collector Jack Sherrington, court costs of #85 and a victim surcharge of #60.

The former Newcastle United and Tottenham midfielder, who lives in Gateshead, was arrested after officers were called to Stevenage rail station in Hertfordshire at around 10.30pm on Thursday 4 July 2013.

Gascoigne, 46, who received treatment for alcoholism in an American clinic earlier this year, was originally charged with two counts of assault, one involving his ex-wife Sheryl, but that charge was dropped.

Gascoigne, clutching a packet of cigarettes and wearing a dark suit, pale blue shirt, beige loafers with no socks and sunglasses, was greeted outside Stevenage Magistrates' Court by a media scrum.

The packed courtroom looked on as the former star, who also had spells at Glasgow Rangers and Lazio, listened to the charges being read to him and entered guilty pleas to assault and drunk and disorderly in a public place.

Gascoigne clutched his mobile phone throughout the court appearance.

Gascoigne admitted assaulting Mr Sherrington when he tried to assist after noticing he was staggering towards the railway tracks.

The ex-footballer was travelling from Newcastle to London King's Cross but got off the train at Stevenage station.

Staff at the station noticed he was drunk and tried to help Gascoigne by putting him in a wheelchair, but he became abusive to Mr Sherrington and used the "c-word'' repeatedly, Elaine McMillan, prosecuting, told the court.

Ms McMillan said Gascoigne grabbed hold of Mr Sherrington in the neck area - an assault which lasted a few seconds.

Mr Sherrington did not suffer any injuries.

The court heard that Gascoigne had been in Newcastle visiting his ill father, who has a heart condition.

Gascoigne's lawyer Gavin Harris said he only consumed a small amount of alcohol due to a "combination of stress caused by worry for his father and acute pain from a hip operation six weeks previously''.

Mr Harris said that because Gascoigne had not drunk alcohol for a significant period of time, the effects were stronger than would have otherwise been the case.

The court heard that Gascoigne's ex-wife and children were called to the station and in her sentencing, chair of the bench Carolyn Marsh pointed out that his 17-year-old son was "distressed''.

The court also heard that Gascoigne was receiving "one to one'' treatment for his alcoholism, which was continuing.

Mr Harris said: "Mr Gascoigne is remorseful and apologises for his actions.''

With his sunglasses back on, Gascoigne left the court and was driven away in a grey Porsche.

In a statement outside court, Mr Harris said: "Mr Gascoigne has asked me to say a few words on his behalf.

"He wants to publicly apologise for his actions that evening.

"He now wishes to be left alone to carry on with his recovery.''