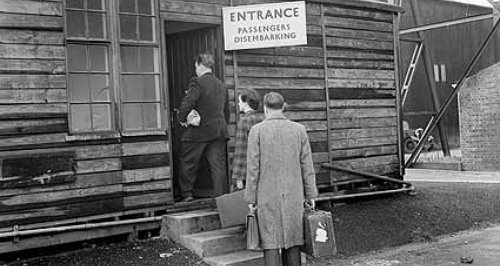 On 16 July 1938, “Luton Municipal Airport” was opened by the then Secretary of State for Air, the Right Honourable Kingsley Wood.

During the Second World War, Luton Municipal Airport was used by the Royal Air Force and was the base for 264 Fighter Squadron. It became the birthplace and home of affordable air travel from the 1950s onwards, and was renamed London Luton Airport in 1990.

Today, Luton is the fifth largest Airport in the UK, carrying approximately 10 million passengers per year.

A Service of Dedication was held on Tuesday 16 July 2013 by the Airport’s Chaplain, Rev’d Michael Banfield.  A reception was also hosted by the Managing Director, Glyn Jones.  The Mayor of Luton, Councillor Sheila Roden, and Deputy Lieutenant of Bedfordshire, Dr. David Siegler, were among those who attended.

Glyn Jones, Managing Director of London Luton Airport, said: “Since the first commercial aircraft departed from here in 1938 the Airport has changed beyond recognition, though its ambition, along with its airline partners, to keep moving into the future remains constant.

"Everyone involved with the Airport has worked hard to make it one of the fastest growing in the UK, creating over 8,000 jobs and opening up new frontiers for our passengers.

"We should all be truly proud of what has been achieved, and be encouraged by what we can further achieve in the future”.