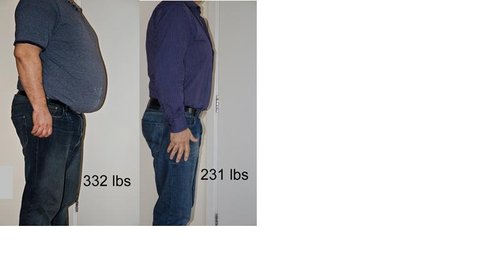 After hearing that the UK's obesity problem may be bigger than first thought Hearts been speaking to a man from Luton who's taken serious action to lose weight.

Neil Hobbs piled on the pounds after his wife died in May 2011.

He sunk into depression and lost control of his eating.

In March 2013 he weighed nearly 24 stone and decided it was time to lose weight.

"I had high blood pressure, was borderline diabetic, I was fast tracking to the grave really and I woke up to the fact that my two sons had lost their mum and they didn't need to lose their dad so I had to do something about it."

He joined the gym to be training partners with a friend from work and 10 months later he's lost 9.5 stone.

At 53 years old he now teaches spinning classes and takes part in triathlons.

He says it was the small achievements that kept him going:

"It's those little victories, sure you can get on the scales every day, or every week, or every fortnight and you see that number drop and it means something but its the little non-scale victories that count, fitting into a shirt that you've had in your cupboard that you didn't fit into before and now you can."