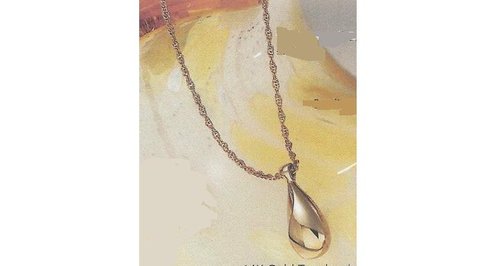 A family from Bedfordshire have been left heartbroken after the ashes of their two year old son who died four years ago were taken in a burglary.

Between 2.45 and 4.50pm on Wednesday 4 September 2013, burglars broke into a house in Linwood Grove, Leighton Buzzard, by forcing open the front door.

Bedfordshire Police say it appears that a search of the property was carried out but nothing was taken apart from several items which were left in a shrine that had been set up to remember the victim’s son, who died four years ago.

Taken from the shrine was a gold necklace with a gold teardrop pendant which has a small screw at the back, like the one shown in the picutre.  The pendant contained the ashes of the victim’s son Daniel.  The victim - Kelly - works in Watford.

DC Chandler said: “This burglary has been extremely upsetting for the victims given the huge sentimental value that the possessions stolen contain and that the anniversary of Daniel’s death is just a fortnight away.

"The offenders probably had no idea about what they were taking but I would appeal to them, or anyone who may have come into possession of these items, to hand them over to the police as quickly as possible so that we can reunite them with the family at this very difficult time.

"I would really like to hear from anyone who was in the area at the time of the burglary or from anyone else who may have information – however small or insignificant they think it is – that could help us. Don’t dismiss your information as unimportant – even tiny details which don’t seem relevant now might become useful later on in the investigation.”