Braintree Family's Fight To Save Sienna 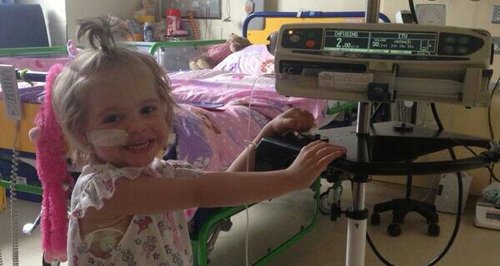 A family from Braintree are trying to raise money so their three year old daughter can receive life-saving treatment overseas.

Sienna Riley was diagnosed with Stage 4 Neuroblastoma (an aggressive form of cancer that develops in the nerve cells) in November 2012 at 20 months old.

On starting intensive treatment at Great Ormond Street Hospital Emma and Darren, Sienna's parents, were also told that their daughter also has a very rare form of Cardiomyopathy (heart muscle disease) and that her heart was failing and functioning at just 8%.

Sienna has spent most of last year in hospital where she was given chemotherapy and radiotherapy.

Despite receiving this treatment there is an 80% chance that Sienna could relapse and would have to go to America or Germany to receive treatment.

Therefore Emma and Darren Riley have set up a fund which has so far received donations of more than £16,000.

Emma has told Heart going abroad would be her daughter's best chance of survival but could cost them up to £500,000: "We've met people on this journey that their child's relapsed and they've not managed to get the funds together. I just can't be in that position where, if it does come back, I just want those funds in place so if I need to take her I can take her tomorrow."

She added: "There's some fantastic people out there and until something like this happens you don't realise how amazing people are. I just can't thank them enough and they will never know how grateful we are.

"We know we have a long way to go and our aim is to raise as much as we possibly can to give her the very best treatment options available,  we will do anything and never stop on our mission to raise these vital funds."