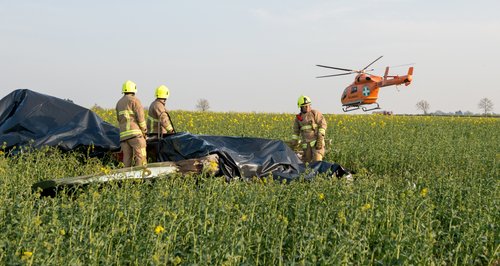 Tributes have been paid to a 29-year-old man from Harlow who was killed along with another man when the plane they were flying in crashed into a field.

Father of one Simon Chamberlain died together with the Yak 52 plane's pilot when they got into difficulties at around 2.55pm on Saturday (29 March) after flying out of North Weald airfield.

Witnesses described how the training aircraft had been attempting a somersault before going down and bursting into flames in a rural area between Ongar and Writtle, near Chelmsford.

Mr Chamberlain's family said last night in a statement: "Yesterday there was a light aircraft crash near Writtle in Essex. Simon Chamberlain, who was 29, was the passenger in that plane. He would have been 30 in May.

"Lizzie, his wife, has lost her best friend and soul mate. His son, Charlie, who will be two years old in August, has lost his father. And his parents, Paul and Steph, have lost a loving son. We love him more than anything the world.

"Our hearts also go out to the other person involved in this tragedy.

"We know that you will respect the fact that we now need time to grieve and give us the space to heal.''

Mr Chamberlain's family said he was an aircraft enthusiast who served as secretary and trustee of the North Weald Airfield Museum, both voluntary roles.

He did everything at North Weald airfield from general maintenance to refuelling helicopters and moving planes around and was also a keen amateur aircraft photographer.

Police have said they are not in a position to identify the pilot, but confirmed that he was also from Essex and his next of kin have been informed.

A coroner from the county is expected to name him today at the opening of an inquest into the men's deaths.