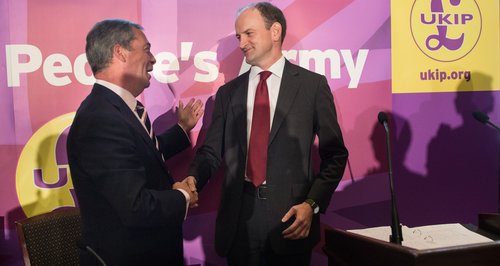 Douglas Carswell's defection to Ukip has come as a ``bolt from the blue'' to his constituency.

Though he had long been viewed as having close ties to Nigel Farage's party because of his strong anti-Europe views, Conservatives in Essex said they had been given no warning of the move.

Mick Page, the Conservative leader of Tendring District Council which covers Clacton, was not aware of Mr Carswell's decision until he was contacted by the Press Association.

"We always thought he was a Conservative very much against Europe but we thought he would work within the party to achieve his aims.

"As far as I'm aware the Conservative association had no warning of this.''

Mr Page added it was difficult to predict what impact the move may have on the resulting by-election.

He added: "He had been getting ready to campaign in the general election and even very recently has sent out a great deal of material with Conservative branding on it.

"This is very much a Tory area but who knows how the electorate will react.''

Phones at the Clacton Conservative Association office were engaged throughout the morning.

The council's Labour leader, Ivan Henderson, said the defection was a sign of panic which may allow opposition parties to capitalise and make gains.

He said: "He's seen the vote increasing for Ukip, seen the possibility he could lose his seat and panicked.

"Douglas has always been a maverick in terms of his party but this is an opportunistic move because he's seen it slipping away from him.

"There may be a backlash and the public may punish the Conservatives for betraying them over Europe."

Mr Carswell has long been a divisive figure in the constituency.

Last year, fellow Tory Peter Halliday resigned as leader of Tendring council, saying of Mr Carswell: "He has done diddly-squat for the constituency."