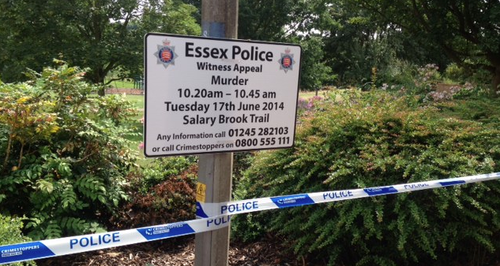 Nahid Almanea was attacked as she walked from her student accommodation in nearby Woodrow Way along the Salary Brook Trail to the university complex in Wivenhoe.

The 31-year-old, who was studying at the University of Essex, died as a result of stab wounds.

Senior Investigating Officer Detective Chief Inspector Lucy Morris made an appeal for people who may have been on the trail between 10.15am and 10.45am on Tuesday, June 17, to come forward.

DCI Morris said: "It was extremely useful to appear on Crimewatch to make an appeal for information. There have been several calls to the incident room as a result of the show and we are sure these will help us with our investigation."

Anybody that has any information about the people that officers are looking to identify are asked to call the incident room on 01245 282103 or Crimestoppers anonymously on 0800 555 111.

Independent charity Crimestoppers has offered a £10,000 reward for information that leads to the conviction of the person or people responsible for the death of Nahid.