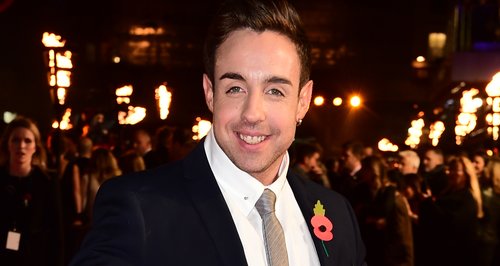 The 33-year-old survived the public vote on Saturday night despite being criticised by judges for his quirky Egyptian-themed version of Sir Elton John's I'm Still Standing.

Simon Cowell said: "You are going to be remembered for that performance, it's the craziest thing I've ever seen on any of these shows.'' And fellow judge Mel B said: ``There's problems in the house.''

Tonight he took part in the sing-off against Andrea Faustini - and won praise from the judges for his performance of This Is The Moment, from the musical Jekyll and Hyde.

They agreed that it stood up well against Faustini's version of Stop, by Sam Brown, with Mel B saying: "That was a great sing-off, you both sang your hearts out - Stevi, who knew you could sing like that?''

She and Cheryl Fernandez-Versini both voted to send Ritchie home - but Cowell told him: "We realise that you are not the best singer, but you've been great fun and a great entertainer, and people have fallen in love with you. I'm going to stand by my Stevi."

That meant Louis Walsh's decision was critical, and he opted to keep Faustini.

Ritchie said: "The whole experience for me has been an absolute dream, I never thought I would get this far. I want to thank you for your support, the production people, the lovely judges, my best friend and mentor Simon.''

The show also featured the latest incarnation of Take That, now down to three, who performed new song These Days.