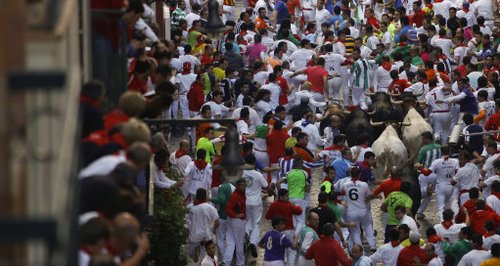 A man from Dunmow is recovering in hospital in Spain after he was trampled on during the world-famous bull run.

Tom Hadfield suffered four fractured ribs and a punctured lung during the San Fermin festival in Pamplona on Tuesday morning.

Speaking from his bed in Hospital De Navarro in the city, Mr Hadfield said: "I've never experienced pain like this before. It's agony.

"I think a few of them trampled me. It's a miracle they didn't crush my skull or break my back.''

Mr Hadfield, who is originally from Dunmow but now lives and works in Nottingham, added: "Afterwards I got up and carried on running for a bit. Then I started to get dizzy and found somewhere safe to keel over.

"Next thing I know I'm vomiting blood on the street and there is a big crowd around me. Then I passed out and woke up in the ambulance. Pretty scary. I thought I was paralysed.''

The Nottingham Trent University graduate, who is originally from Dunmow, travelled to Spain on Monday with friends so they could take part in the bull run before heading to a music festival on the outskirts of Bilbao.

The 23-year-old now expects to be in hospital for the rest of this week before flying home and returning to work.