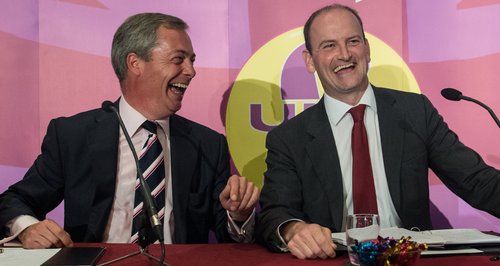 In a bombshell news conference, the backbencher lambasted the Prime Minister and senior Conservatives for not being "serious about real change".

Among a list of criticisms, he insisted that the failure to take a stand against the European Union was at the heart of his decision.

"They are not serious about real change. It's above all the failure to deliver on the promise of political reform that has driven me to be here today,'' he said.

"Europe's the one continent on the globe that is not growing ... Yet who in Westminster, who among our so-called leaders is prepared to envisage real change?"

Mr Carswell said he had been an enthusiastic cheerleader for Mr Cameron's Bloomberg speech, in which he set out proposals for an in-out referendum by 2017 if the Tories are in power after next year's general election.

But he said he did not believe the policy was "sincere", saying the leadership wanted to secure "just enough" to pretend change was happening.

"No one cheered DC's Bloomberg speech more loudly than me ... but there's been nothing since. They haven't thought it through.

"There is a world of change and opportunity out there ... ministers are simply not up to giving us the kind of realignment we need.''

Mr Carswell said it would have been easier for him to "muddle along" as a Tory backbencher until next May, but he wanted to do the "honourable" thing.

"As someone who's always answered directly to the independent-minded people of Essex, there is only one honourable thing for me to do,'' he said.

"I must seek permission from my boss, the people of Clacton. I will now resign from Parliament and stand for Ukip in the by-election that now follows."

The Clacton MP entered Parliament in 2005, and has frequently rebelled over European issues.

Ukip's only representation in the Commons to date came when Castle Point MP Bob Spink defected from the Conservatives in 2008, although he subsequently stood unsuccessfully as an independent at the 2010 general election.

Mr Carswell said he would be resigning from Parliament today. He was originally elected as MP for Harwich in 2005, but was returned in Clacton in 2010 after boundary changes with a majority of over 12,000.

The Tories could be in for a major battle to retain the seat, as Mr Carswell is known as an independent-minded politician and is believed to have a significant personal following.

A Conservative spokesman said: "This is a regrettable and frankly counterproductive decision. As Douglas Carswell said, the only way to get a referendum on the EU is to return a majority Conservative government."

Mr Carswell said only Ukip could "shake up that cosy little clique called Westminster", adding: "Many are just in it for themselves. They seek every great office, yet they believe in so little. Only Ukip can change this."