Essex's Mark Cavendish Out Of The Tour De France 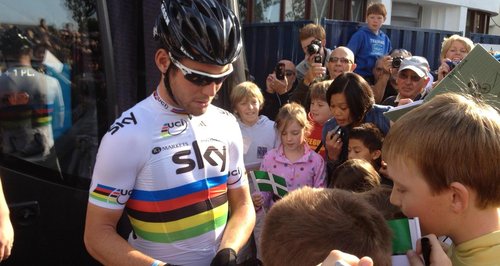 Ongar's Mark Cavendish is out of the Tour de France after suffering a shoulder injury in a crash on Saturday's opening stage to Harrogate.

The 29-year-old Omega Pharma-QuickStep sprinter did not start yesterday's (Sunday 6 July) second stage from York to Sheffield due to the pain caused when he tumbled to the tarmac in a frantic finale on stage one.

The 25-times Tour stage winner suffered a separated AC joint after colliding with Australian Simon Gerrans (Orica-GreenEdge) as Giant-Shimano's Marcel Kittel won the stage and with it the yellow jersey.

"We knew straight away. I normally bounce back from crashes quite well; I assessed my body yesterday and for the first time in my career I knew something was wrong.

"I was in pain last night. I held a bit of optimism that it was maybe just swelling and would go down overnight, but it's actually worse this morning. It's not possible to start from a medical point of view.''

It is still uncertain if Cavendish will be able to participate in the Commonwealth Games in Glasgow for the Isle of Man.

"I need to go and get an MRI and perhaps surgery,'' Cavendish said.

"I'll try and get that sorted as soon as possible.''

Cavendish was pursuing a first yellow jersey of his distinguished career in his mother's home town when he crashed 250 metres from the finish line.

He admitted he was culpable - "I tried to find a gap that wasn't there,'' he said - and apologised to Gerrans, but the Help for Heroes ambassador found perspective when a friend sent him a text message on Saturday night.

"I've got friends who have come back from Afghanistan with the armed forces.

"My friend Josh is a double amputee on his legs and missing his right arm. He just sent me a message joking saying 'I've got a spare arm for you'.

"I'm in the left-handed club with him for a bit now, but things could be worse. It was my fault at the end of the day.''

Despite being in obvious pain, Cavendish was determined to cross the line after around two million fans lined the roadside for the 190.5-kilometre route from Leeds.

Cavendish said: "I wanted to finish. The crowd that was out, I had to get my bike to the finish.''