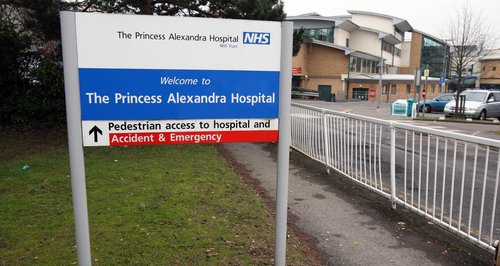 An inquest into the death of an elderly patient at the Princess Alexandra hospital in Harlow has ruled staff missed an opportunity to save her life.

71 year old Barbara O'Brien was admitted to the hospital in January after suffering from pneumonia. She was assessed on admission as being at a low (3%) risk of death from the condition.

A report found when Mrs O'Brien's observations deteriorated, staff failed to comply with the National Early Warning Score (NEWS) protocol for acutely-ill patients. They did not note her worsening hypoxia and escalate care to a senior nurse or doctor as NEWS would have required.

When a patient's vital signs are outside normal parameters, depending on the actual score, staff must take action or involve a doctor. In this case, staff either failed to calculate the score correctly or did not respond adequately to an accurate score.

Without the medical response she needed, her condition worsened, and her deterioration went undetected and untreated. On the day prior to her death there had been a 15 hour delay in her being reviewed by the doctor which the Trust have admitted was 'unacceptable'.

Five days after her admission to hospital, she suffered a fatal heart attack.

An investigation following Mrs O'Brien's death concluded that, had staff responded appropriately and she had been reviewed earlier, there would have been a good possibility of her surviving the episode of pneumonia.

It found among the factors contributing to the outcome were a poor and inaccurate assessment by the nursing staff, failure to seek input from more senior medical staff and non-compliance with the NEWS process.

The Coroner concluded that due to the miscalculation of the NEWS score, appropriate action was not taken and even when it was calculated correctly, there was no escalation which led to a 'missed opportunity' to save Mrs O'Brien.

Acting for Mrs O'Brien's daughter Sharon, her solicitor Sarah Wealleans said: "The failures in the care afforded to Mrs O'Brien were unacceptable and this was reflected throughout the Inquest process. Her family thought she was in the best place and never once thought that she was being so badly let down by the professionals in whom they had put their trust.

"What makes it even worse is that her family never had the opportunity to say goodbye to her, because no one had taken any notice of the deterioration and warned the family of this."

Sharon added: "We are pleased that the Coroner recognised the failings of the hospital.  What saddens us greatly is that during the inexplicable 15 hour delay waiting to be seen by a doctor, my mum was left feeling that they didn't care. The hospital's failure to act upon her deteriorating condition meant that no one was called, not even her family, thus she was left without any help to die alone, without the comfort of those she loved."

An Inquest into her death was held at Chelmsford Coroner's Court on Tuesday (4 November).

The Princess Alexandra Trust has released this statement to Heart:

Following the very sad death of Mrs O'Brien, the Trust carried out an investigation into what had occurred and as a consequence produced a Root Cause Analysis Investigation Report which made various recommendations.

A copy of that report was provided in advance of the inquest to Mrs O'Brien's family and, of course, to the Coroner and the recommendations have been implemented.

The Trust wishes to express its very sincere condolences to the family for their loss.